The greatest striker i've ever seen 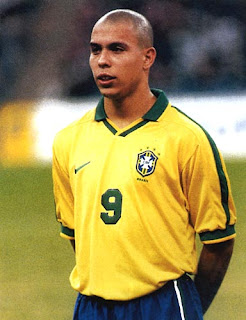 The Real Ronaldo
Ronaldo Luiz Nazario da Lima
The greatest striker I’ve ever seen? Yeah!
King of the nutmeg with pace and finesse
Completely unplayable, defenders oppressed
Most of his goals they were only sublime
I bought his Brazil shirt Ronaldos R-nine
He wore a goofy grin and a cheeky smile
Whether crowd was friendly or hostile
The lad he had everything in his bag of tricks
All he was short was some ortho-don-tics
Horrendous injuries, so hard to handle
Some of his hairstyles were more of a scandal
Loved a big party, not ever a pooper
Resplendent with models that were only super
Like myself partial to putting on weight
Size didn’t hamper his goal per game rate
Four hundred and twenty goals he did score
A goal every game and a half, now no more
Seen wonderful strikers but I cannot be clearer
Ronaldo, the greatest of this modern era
﻿I would have to say this lad was the greatest I have ever seen, always loved to watch him play. He has scored more goals in World Cup finals than anyone else despite his career being littered with horrific injuries.
Just look at the stats, magnificent.
Adeus El Fenomeno.
Posted by Darren O'Keeffe at 06:36 No comments:

This week i'll be mostly listening to...

and The Go! Team and their new single Buy Nothing Day.

Posted by Darren O'Keeffe at 01:23 No comments:

Can you hear the Drums? 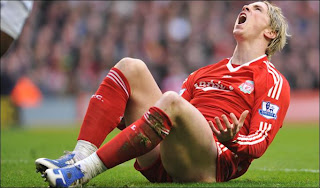 Can you hear the Drums?
Revered and adored
Listless and bored
Hodgson to the sword
Form now restored
Sudden form upturn
King Kennys return?
Or agent head turn
Latter, I’d discern
Nicknamed the kid
Came from Madrid
£35 million quid?
Insulting first bid
Your Interest expressed
Spent Friday depressed
Void of all zest
Then transfer request
Liverpool spurned
For London you yearned
No 9 jersey burned
50 million we learned
Oligarchic financer
Wages enhancer
Agents the cancer
What is the answer?
Your colour now blue
Get a lion tattoo
Decorum undue
Have a careful debut
Posted by Darren O'Keeffe at 05:18 No comments: 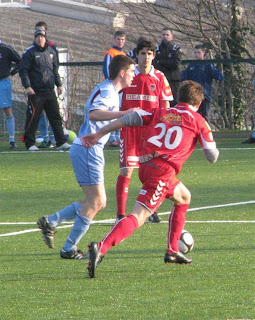 Worlds Apart
Went to bed last Friday night
Torres syndrome was induced
So sick of footballs current plight
Greed and money rule the roost
On a chilly Saturday afternoon
First pre season game was here
The kind that couldn’t come too soon
The Ram-blers, our neighbours dear
My three year old just wants a game
His silky touch, his slide rule pass
“Let’s play football” he proclaimed
With his old man and a yard of grass
On the plastic pitch, no fancy stadia
The trialists pray they’re not withdrawn
From Hungary out to far Canadia
This is grassroots, no sandwiched prawn
That song I couldn’t quite excrete
I sang the  “Fer-nan-do Torres” line
A little voice from the back seat
Retorts with  “Liverpools number nine”
I was so sick of football after Torres handed in his transfer request last Friday night but Saturday brought me right back to what its all about, the local derby, Cork City v Cobh Ramblers.
Both teams have been through the mill over the last number of seasons but still they survive run by the fans for the fans.
The game had players from all over the world trying their damnedest to earn a contract for the coming season and my lad with no interest in any of it.
He just wanted to play ball.(and sing songs)
Posted by Darren O'Keeffe at 06:43 No comments: