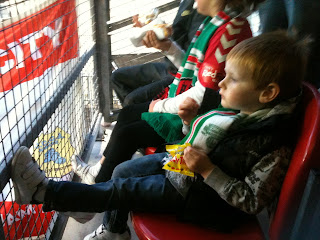 A Premier Spot
Two home defeats all in a row
More than matched our premier foe
Grand scheme of things not worth a jot
If we don’t get a premier spot
Cup Quarter Final, Pats again
Pete Mahon, the leagues comedian
Danny North, he turned and shot
But it’s all about a premier spot
Last Saturday night, scene was set
The game, few pints, our whistles wet
Whether Zayeds spotter scored or not
Our main concern, a premier spot
In Section A a crèche was made
As FOCCA Juniors learned their trade
My son mouth full of jelly tots
Shouts “Come on City, premier spot”
We've lost our last two home games, they were both cup games and both by one goal to nil against Premier Division opposition.
We were well on top for long periods in both games and have proven ourselves to be more than ready for a return.
In order to achieve this we have 5 Cup Finals left in the league and we need to win them all.
Starting with Finn Harps this Friday.
Posted by Darren O'Keeffe at 06:09 No comments:

The die is cast. 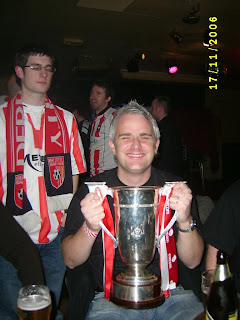 The die is cast
From the island’s opposite ends
We’re just like long lost friends
We’ve both had our ups and our downs
Shared stories in copious rounds
The Lodge in March of eighty six,
Hennesseys goal, a teenage kick
Three years later, haunts like a ghost
Dave Barrys shot, came off the post
November two thousand and five
The greatest night ever alive
The Shed packed to the end of its tether
As we laughed and we cried all together
Some have our City infiltrated
Still these folks must be translated
Whatever the Sit-she-a-shun
Text message might be need to be done.
Our moment of glory converging
Can you see the pattern emerging?
We’ve won it first in eighty seven
Kieran Myers showed us heaven
Twelve years later in ninety nine
Hargies finish was so sublime
Another twelve have now since passed
The cup is ours, the die is cast.
This poem was submitted to the FAI for the League Cup Final Programme on Saturday next.
We've always had great relations with our northern friends, in fact we've even taken in a few strays over the years. Mind you we still haven't a clue what they're saying.
The picture above was taken in Derry in 2006 after the last game of the season at a time when Derry owned the trophy, here's hoping for green ribbons on Saturday night.
P.S. I've taken poetic licence in forgetting our 1996 victory in Dundalk.﻿
Posted by Darren O'Keeffe at 12:53 No comments:

Lately we are mostly listening to.....

My kids and I love this song.
They know all the words

It's Pete and the Pirates - Half Moon Street.

Posted by Darren O'Keeffe at 07:25 No comments:

I was out dancing at a disco last Friday night.
I know, I know, at my age.
But I was in the presence of some younger colleagues who said it would be a good idea.
And it was.
A fantastic night.
I haven't got home at three o'clock in the morning in a long long time.

And by God did we dance.
In fact one song had me so moved I had to ask the DJ what it was.

My legs didn't half hurt on Saturday morning.

Posted by Darren O'Keeffe at 03:29 No comments: 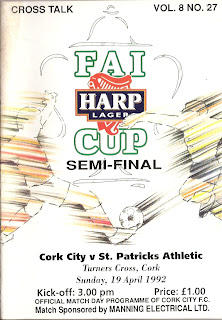 Land Mark
It was April nineteenth of the year ninety two
Unbeaten at home since McNultys miscue
Biscuits on goal with Gunther to his right
Conroy and Bannon were keeping it tight
Our very first Frenchman pre Monsieur Candau
Stefan Napiér, up the left he did plough
Midfield saw the brawn and the brains of the side
The muscle was Cotter and big Deccie Hyde
Davey had both, he caressed that football
Jinky Gerry cast wizardly spells on us all
Morley and Caulfield they lead the front line
Before they got notions and grander designs
The Shed was packed tight, no room to be found
Kick off three o’clock, the programme a pound.
Tight enough game, we were all on a sweat
Til the ball dropped to Bannon who rattled the net
The surge to the front took us down like the wave
That appeared in the ad for Old Spice aftershave
Half an hour later, Lansdowne Road beckoned
Joy tinged with sadness when you thought for a second
That this day was a milestone, green hills faraway
As we bade our farewells to the Cross on that day
Headed off to new westerly pastures Plonk found
To a Bishopstown bog and our spanking new ground
As we play St Pats this week in the FAI Cup Quarter Final my mind wandered back to the Semi Final of 1992 also against Pats which was a land mark day for Cork City Football Club.

Paul Bannon scored on the hour as we beat St Pats by 1-0.
Posted by Darren O'Keeffe at 01:13 No comments: 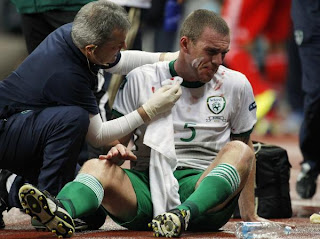 Opened up at will
A matter of time.

Given full stretch
Dunne off the line
Andrews last ditch

On my knees
Deep breaths then
Comedy texts
“Russia were awful”
“How did we not score?”
“Is that the same Arshavin that plays for Arsenal?”
The most fraught and tense 90 minutes of my life, we were battered by a vastly superior Russian side.
They opened us up at will and it seemed we'd be beaten by 5 or 6.

But through a mixture of bad finishing, luck, determination, blood and guts, we kept them out.
No one greater than Richard Dunne.
Doesn't every football fan yearn for a centre half that will put their body on the line, bleed for the cause, a true Irish legend.
Posted by Darren O'Keeffe at 04:32 No comments: 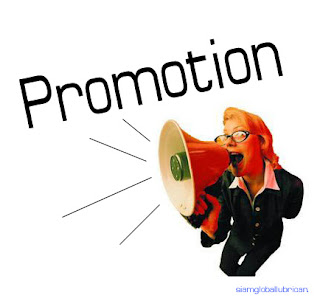 Our aims are not this
Our aims are quite clear
One thing we can’t miss
Is promotion this year.

What do we seek?
What do we require?
Look at Rovers last week
For us to aspire
So here we are sitting in 2nd place with just one defeat in 22 league games, are in the quarter finals of the FAI Cup and host Derry City on Sep 24th in the League Cup Final, all very nice but without promotion it all means nothing.

Well done to Shamrock Rovers last Thursday, 5 years ago they were in the First Division finding their feet as a fan run club just like us.
If that's doesn't motivate our players then I don't know what will.
Posted by Darren O'Keeffe at 04:23 No comments: