This week I'll be mostly listening to...

I heard this song on Steve Lamacq and like Kylie I can't get it out of head.
Its by Metronomy and it's called The Look.

Also heard this infectious track from Cut Copy.
Its called Need You Now and is from the album Zonoscope.

Posted by Darren O'Keeffe at 00:47 No comments: 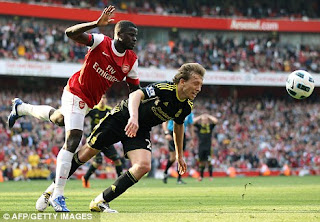 André the Giant
Home side were toiling
Pool boldly foiling
Gunners were huffing
Black and yellas rebuffing
Carra first in
Took one on the chin
Stretchered with care
Neck brace and some air
The board it did state
Added minutes of eight
A loose leg from Spearing
Spot kick engineering
Crowd shriek “Good Gramercy!”
White vested Van Persie
Suarez free kick is cleared
Lucas still persevered
He’s barged to the ground
What comes? Goes around.
Wenger, arms spread and befuddled
Approaches Kenny for a cuddle
The wheel has come full circle since Reinas mistake gifted Arsenal a 91st minute point last August.
Interesting Facchht : Just 4 minutes and 49 seconds of football were played between the end of the 90 and the final whistle.
Posted by Darren O'Keeffe at 04:30 No comments:

This week i'll be mostly listening to...

Also listening to the new Strokes album called Angles.
This is my favourite track, it's called Call Me Back.

Posted by Darren O'Keeffe at 01:37 No comments: 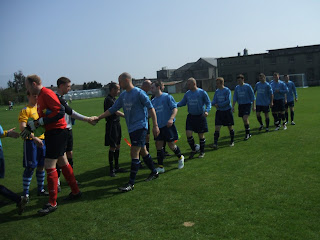 Away Win
Up in Dublin on family stuff
Football related oddly enough
A Crumlin pitch behind the school hall
A glorious day for a game of ball
An old man next to me on the line
Starts chatting in the warm sunshine
He talked of each Crumlin player by name
Guiding them through every pass of the game
He had gone to school here way back when
A pitch just for Gaelic, no grass on it then
The surface now was carpet like though
With Irelands best amateur players on show
“How are Cork FORAS doing?” he said
“Up until last night the table we led”
He loved to see local players come through
I point out the five ex City on view
I was only too happy to talk of my team
And our first division title dream
And then he mentions without a care
“My Thomas is the manager down there.”
There is nothing sweeter than an away win in Dublin.
I was in the Pale last Sunday supporting Avondale United in the semi final of the FAI Intermediate Cup away to Crumlin United. Crumlin had beaten Avondale in last years final and were going for three in a row this year but the Dale progressed by two goals to one.

During the game I got chatting to an old man on the sideline and from talking to him you could sense his passion for the game.
It was only later when he asked about Cork City that I realised I was talking to the great Theo Dunne, father of our manager Tommy.
Posted by Darren O'Keeffe at 01:55 No comments: 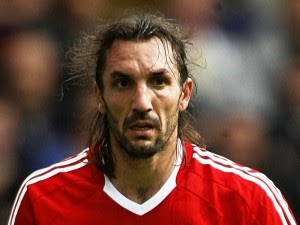 Zorba The Greek
We all did hail Zorba the Greek
Unaware what havoc you would wreak
Your running pace a slow andante
A Divine Comedy by Dante
Is happiness a frugal heart?
Away clean sheet be nice to start
Our one nil lead you did expunge
With your silly pointless lunge
Our defence turns to semolina
With boo boo after Bouboulina
It came to you as some surprise
Torpedo falling from the skies
Pepe dives, the lad fell over
You standing there like Super Grover
I fear you’ll never find your feet
Be gone to lignite mine in Crete
Zorba The Greek is a novel written by Nikos Kazantzakis in 1946.
It tells the tale of a young Greek intellectual who puts aside his copy of A Divine Comedy by Dante and sets off to re-open a lignite mine in Crete with the help of the boisterous and mysterious Alexis Zorba.
Bouboulina is a pet name given by Zorba to Madame Hortense the hotel owner.

Sotirios Kyrgiakos on the other hand had a nightmare last Satruday.
Posted by Darren O'Keeffe at 08:03 No comments: