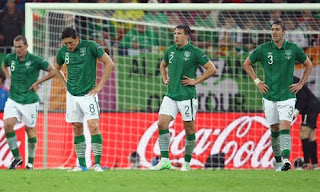 Clap-Trap
Trappatoni doing it his way, damn the nation
An old man with an old plan, dull formation
His way or the highway, sure he’s misunderstood
Like it or lump it, we would if we could.

Six years since Duffer last took on his man
We yearn for the days of Kev O’Callaghan
Cap grabber Given, hurt or run of the mill?
Robbie’s retired to the Hollywood Hills

First four halves, we conceded early on
Rained on us consistently, no one shone,
Ward used to rampage down the wing in his prime
Transformed, dodgy full back, not the boys’ crime

Deflected the focus from pitiful stuff
Haven’t real Irish fans suffered enough?
Trap has presided o’er the worst ever seen
And insulted our nation by using Paul Green
Posted by Darren O'Keeffe at 16:20 No comments:

It's Great To Be Back 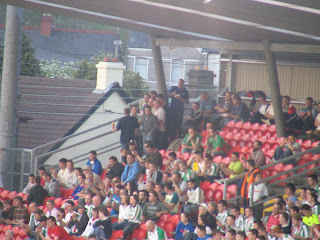 It's Great To Be Back

Been out of the game these last seven weeks.
For reasons quite boring and trite
The telly’s not bad with the Croats or Greeks
But you can’t beat the live Friday night

It’s Derry this week with Jonah McCourt
Curragh Road with Lucas and dad
Joining my brethren in sacred support
To watch my dear City, how bad?

This Friday will be my first game in 7 weeks, I cannot wait.
Posted by Darren O'Keeffe at 04:36 No comments:

After a few months of study hibernation, i'm back.
College was hard first time round, it's harder 20 years later.
Anyway I heard this choon by Bleech and I thought it was good, it's called Adrenaline Junkie.

and then there's this by Beach House, it's called Myth

Posted by Darren O'Keeffe at 01:27 No comments: