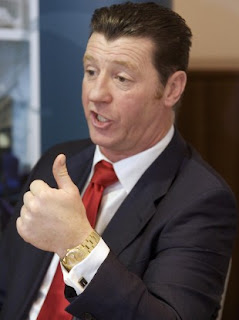 Rodericks Return
Was he really our gaffer
Did he manage a game?
Not quite Arthur Laffer
In a time tinged with shame.
For a quote always willin’
The king of the cheese
A pantomime villain
Amongst the Maltese
He revels on banter
And snakes in the grass
A kind of enchanter
Neck of solid brass
Ever stylish and dapper
You can’t put him down
Be a booer or clapper
Roderick’s back in town
This coming Friday sees the return of Roderick "Shoddy" Collins to Turners Cross.

He was manager of Cork City between December 2009 and February 2010, a somewhat ill fated time for our club, he never managed us in a competitive game.

Arthur Laffer was US Economist who served on Ronald  Reagans Economic Policy Advisory Board between 1981 and 1989 and is best known for the Laffer curve.
This is an illustration of tax elasticity which asserts that, in certain situations, a decrease in tax rates could result in an increase in tax revenues. 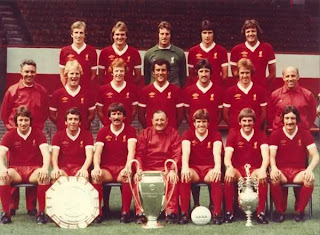 Time For Reflection
Milestone birthday this week
Not fresh faced nor meek
Not a second thought given.
Cos life is for livin’
Sunday last, time of crunch
QFT, out for lunch
I just tried to forget
For the fear of upset
I had no need to worry
Texts came in a flurry
Suarez twinkle toes
Befuddled our foes
Nanis head precision
Dirks second incision
Edwins further spillage
Completed the pillage
It doth make you reflect
Reassess, recollect
Takes me back to the day
When my hair wasn’t grey
My earliest joy
As a six year old boy
Beat United in style
Went to bed with a smile.

My earliest memory of watching Liverpool is a 3-1 win over Manchester United on the 25th of February 1978 when as a six year old I was allowed stay up for Match of the Day.
This weeks milestone birthday has made me reflect on lots of things and last Sunday brought me right back to that day in 1978 when Souness' first goal for the club, Ray Kennedy and Jimmy Case scored the goals that defeated the old enemy. 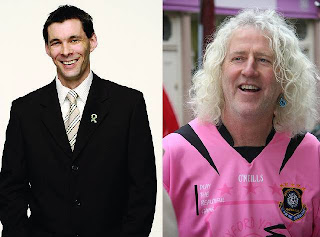 Block A this Friday, football consumed
My one focus Cork City FC
For Wexford and City, service resumed
Both clubs with their own new TD

Last Fridays general election  had me strangely attracted to the coverage.
I think it was allure of Fianna Fáil getting their come uppance for luring the country into such an awful state.
The new season starts tonight and we play Wexford Youths at home, both clubs have brand new representation in the Dáil.
Wexfords chairman Mick Wallace was voted in as an independent candidate in Wexford and Jonathan O'Brien a member of Cork Citys board was also elected in Cork.
This poem will appear in tonights Cork City FC match programme.
Let the season commence.
Posted by Darren O'Keeffe at 05:05 1 comment:

Spanish Archer
Vile Spanish Archer
No early departure
McCarthy lad tough
No rolling round stuff
A vicious attack
Deliberate whack
Red card did Mark render?
Laugh and joke with offender
Awardance of a free?
Visual periphery?
Accidental presumption?
Shows negative gumption
Why not be consistent
Consult your assistant
Failing that above all
Check your crystal ball
Very comfortable win
Made by heinous sin
No justice, just shame
By the refs guessing game
A bad mistake or a cunning plot?
For a league two game at Aldershot
Three match ban escaped, a fraud
FIFAs rule book sadly flawed
An awful mistake by Mark Clattenburg lets Rooney away with an elbow on James McCarthy.

It is quite clear from the TV pictures that the referee had his eyes rightly on the ball and not on the "coming together" of Rooney and McCarthy so I thought that if the referee didn't see the offence then he couldn't give a free but he claims he saw the incident and took the appropriate action.

Surely any referee worth his salt, having seen a player purposely elbow another player would have branded a red card?
This can only mean that Clattenburg saw it in his peripheral vision and basically took a guess which has backfired on him horribly. Why didn't he consult his officials?

If the perceived foul had happened in the box would Mr Clattenburg have assumed a penalty?

Maybe he'd have asked the eight ball.
Posted by Darren O'Keeffe at 04:35 No comments: